The handwritten screenplay for Fanny and Alexander, diary entries and letters are among Ingmar Bergman’s personal documents now being rescued for posterity thanks to Billerud. The secret? Smart packaging, of course! 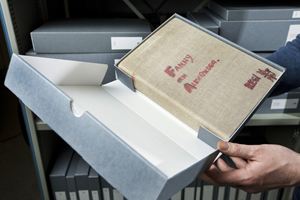 In 2002 the Ingmar Bergman Foundation took over more than 40 packing boxes containing documents from the master director’s private archive on the island of Fårö. Most of the material was handwritten, which caused the foundation a lot of problems.

“The fact is that ordinary packing boxes literally suck the ink from documents stored in them. In short, Bergman’s notes ran the risk of disappearing into thin air thereby destroying a priceless cultural treasure,” says Jimmy Nyström, Business Development Director at Billerud.

The solution to the problem was Billerud Pure Archive, an acid free material of primary fibre, which is manufactured at Gruvön and protects paper documents from ageing.

“Billerud Pure Archive is a good example of our use of intelligent materials and smart packaging; it’s all about conserving, not storing. Many museums and institutions have digitised their archives but have not yet found a good solution for conserving the original documents. This means there’s a global market waiting to be developed and Billerud Pure Archive gives us a unique product to offer,” says Mikael Andersson, Sales and Marketing Director of Packaging Boards at Billerud.

Jan Holmberg, CEO of the Ingmar Bergman Foundation, is of course pleased that the old archive boxes are now being replaced by new boxes, with each box tailored to the measurements of the conserved documents. These include everything from customs documents for the export of yoghurt, to post from neighbours about snow clearing on Ymervägen outside Bergman’s former home in the Stockholm suburb of Djursholm, but above all, the notebooks that were the basis of Bergman’s theatre and film productions.

“The screenplay for Love with no Lovers, which Bergman himself finally rejected and aptly wrote in an accompanying note that he ‘consigned the script to the archive department for unrealisable visions and dreams’. And the other is the stock of unused notebooks. It’s a titillating thought to reflect on what Bergman had planned to write in these books,” says Jan Holmberg.

The jewel in the foundation’s archive – listed at Unesco The Memory of the World Register – at the Film House in Stockholm is the workbook for the Oscar-winning film Fanny and Alexander, which Per Lindberg, CEO of Billerud, carefully leafs through when he visits the foundation.

“It’s a fantastic archive and of course a great honour for us to be involved in conserving this cultural treasure. Standing here with Bergman’s handwritten notes and knowing that they will now be conserved for many centuries thanks to a Billerud innovation is naturally very gratifying,” says Per Lindberg.

FOOTNOTE:
But why did Ingmar Bergman export yoghurt? According to Jan Holmberg, it was actually sour milk and the reason was probably Bergman’s stomach problems. During a period in the 1970s Bergman lived in Munich and was probably unable to find sour milk to calm his stomach. He therefore got his Swedish company Cinematograph to send him Swedish sour milk, which was declared as ‘yoghurt’ so that the German customs would know what it was...